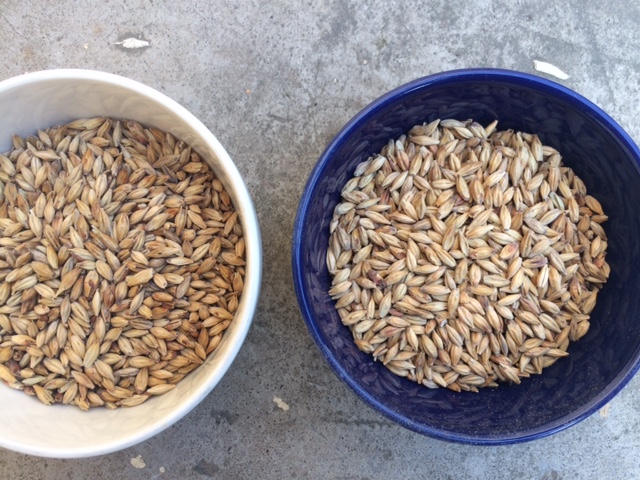 Is there really a difference in taste between Weyermann Pale Ale and Malteurop Pale Malt? This experiment was designed to help answer that question.

I decided to go with a triangle test evaluation method to find out if people could taste the difference. I had a total of 16 people taste and needed 9 people to determine statistical significance within a p-value of .05. Huge thanks to the folks at Brulosophy for producing a torrent of content and great examples of how to compare a variable. I would like to add that the whole format to this post is similar to their stuff.

The only difference in equipment between these beers is the kettles they in which they were brewed. One of my kettles results in a more robust boil. Both are electric, have produce a vigorous boil.
Two other variables arose that were my fault. One is that I’m pretty sure I used 2 liters more water in the Malteurop batch. This accounts for some of the gravity variance.  I also received feedback from one taster that the carbonation level was different. I remember that for some reason the carbonation levels did get messed up. This variable probably self corrected over time. There was a weeks time gap between the first set and the last people to do the test.

Czech-ish Pilsner. Hops were Zeus and Saaz, grain was from Germany and China, yeast was Fermentis S-23. You decide if these beers were Chinese, German, or something else. They closely resemble a Czech Pilsner though. Also my water profile favored the Czech style.

The Same for Both

*My water is close to RO but I have not had it tested so I can’t confirm the efficacy of my filters. I didn’t use any software to adjust my water profile or hit a specific mash pH or I probably would not have added the lactic acid.

Tasters where served 3 beers in black coffee mugs that where labeled on the bottom with my super secret code. Pretty standard triangle test. I did not keep the odd beer out consistent throughout the testing, live and learn.

16 people tasted. 6 people got it right (selected the odd beer). This gives a p-value .453 and means the finding is insignificant. Again, I needed 9 to prove some kind of significant difference could be reliably identified by the tasters. This means people could not reliably tell the difference between the beers.

Let’s face it, by appearance alone these beers are different but the tasters don’t lie, because they can’t. There wasn’t a taste-able difference. Due to the fact that I live in a remote corner of the world I don’t have the same access to many professional palettes. My tasters were commoners. I sit on the fence on the issue. Whose opinion really matters when it comes to things like this, the people drinking the beer right? That said, the people that did get it right gave me very specific feed back, one of whom is an experienced coffee roaster/brewer/businessman.

I asked the people that could tell the difference between samples. My friend that roasts and tastes a lot of coffee used descriptors of “sharper” and “crisp” to describe the Malteurop sample and “full” and “well rounded” to describe the Weyermann sample. That is just one persons analysis but it also coming from someone that doesn’t drink beer (less bias?) but does know how to taste and analyze beverages. To be clear, I not saying one person is a significant amount of data at all. But as far as common conceptions of what these different base malts impart into our beers he hit the nail on the head.

My gut tells me that there was a difference, beyond the fact that there were more than a few extraneous variables. But the thing that stands out the most to me is that in spite of my sloppy brewing and other variables, the beers did not come back as distinguishable.

While I  like to be picky about my grain, this experience has lead me to be less so. I brew with what is on hand. Due to some connections I have had a large supply of Malteurop 2-row Pale Malt.  I am looking forward to the day when I have exhausted my supply and can put to rest my “waste not want not” mentality and buy some other base malts.